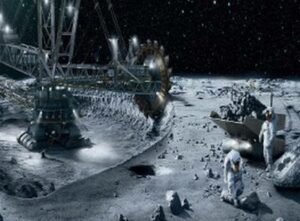 „NASA JPL calculations for asteroids values in our SOLAR SYSTEM”

Table of values in US$

Please feel free to download the integral text in PDF format by clicking here
“We choose to go to the moon in this decade and do the other things, not because they are easy, but because they are hard, because that goal will serve to organize and measure the best of our energies and skills, because that challenge is one that we are willing to accept, one we are unwilling to postpone, and one which we intend to win, and the others, too. “ John F. Kennedy, Rice UNIVERSITY Speech, 1962.

Trump Signs Executive Order to Mine the Moon for Minerals

The extraterrestrial resources present all around us in the Solar system represent both a huge potential benefit and a solution for the Future of Earth and its Citizens. At GlycanSpaceXR we are dedicated to make this Future reality. We have got the necessary expertise to develop the tools that are needed. This is the goal of our Mission XR-ETMR. We develop the Mining and Refining tools as well as we develop the necessary strategy to outdo this challenge.

The minerals present on the Earth are generally associated with molecules of water and other organic radicals (water of crystallization).

Chemical reactions and combinations of mineral salts is possible because water is a thermodynamic liquid with unique properties, even often considered as the first quantum liquid for bio-engineering (Intronic biology).

The minerals extracted from open mines and even those from deep mines are brought back to the surface of the earth where gravity is g: +/- 9.81 m.s-2 . The average terrestrial atmosphere according to the atmospheric layers, near the soil is N2 -78% -O2- 21% and 1% composed of rare gases Argon-Helium-others.

This geochemistry and magnetic environment has strongly influenced the design of the tools for drilling, geophysical exploration, excavation, and transformations of minerals into raw materials, awaiting a refining of technical grade or pure (natural metallic elements).

The experience on the Moon (the first step essential to mining and extraterrestrial refining and execute the ROBOTICS tools ), will teach us the necessary Engineering before any Mining and Refining in Deep Space or other moons and planets and asteroids.

The launch of missions, especially „unmanned missions”, is currently illogical and dangerous. Moreover it is still currently absurd to financial ROI. We have first to master the new Engineering on the ground (laboratories of simulation-prototypes) and especially on the Moon, natural satellite nearest 380’000 km, which can constitute a mandatory strategic backbone, easily reachable with spacecrafts (possibly equipped with plasma motor engines, Mission XR-PROP (Spacecraft Propulsion)… or other …)

On the Moon or on other celestial objects (Mars and other Planets and their moons) the conditions are completely different and the currently known Earth-made Mining Engineering is not immediately applicable.

A specialized education and training will have to be provided in some NASA-ESA- related schools. This is one of the main purposes of the American Institute for Quantum Sciences and Plasma Technologies- Pasadena- Non Profit Organization (GlycanSpaceXR).

On the Asteroids the situation is even more difficult because of the very nature of the asteroids even if, classes of type S, M, or others contain rare, valuable, strategic metals such as lanthanides Ln3 + (rare earths) in the form of oxides or pure metals and precious metals group PMGs , according to the first XRF Radars or ICP-MS assessments of the analytical content of these metals.

Direct exploitation is currently impossible for security reasons related to the risk of modifying/splitting the geodesy and gravitational balance of the Solar System.

Extraterrestrial Mining technologies have not yet been fully invented or developed.

To confirm this opinion the probe launched by NASA will recover on the asteroid BENNU 2060 g (2kg) of ore regoliths by means of the tool TAGSAM for an investment of more than 800 MU $ !.

Indeed the OSIRIS-REx for BENNU probe has been launched by NASA for mainly cosmogonic goals not for preliminary mining operations.

The adventure on orbital asteroid type BENNU or other remains complicated and demonstrate that we must create first the learning and strategic tools as a whole to apply them on planets, moons and asteroids.

Although MINING and REFINING technologies are not yet fully available or disclosed by the laboratories, GlycanSpaceXR Agency and other entrepreneurs are willing to accept this important challenge.

GlycanSpaceXR AGENCY has based its Mining and Refining Extraterrestrial company on the development of plasma technologies since 2006 (2006 and 2016 USPTO). They will be implemented on the Moon and on the Earth’s ground (simulation laboratories) in USA and Luxembourg, these technologies will be naturally associated with robotic tools of new generation type (mission XR-IR, NEURAL-ROBOTICS).

Extraterrestrial Mining and Refining will be predominantly composed of UNMANNED Missions (XR-IR).

REFINING (Patents 2006-2016 USPTO/PCT Phase)
HELIOTORR Stations (patent writing) SOLAR SYSTEM
Materials processing
As a result of the operations of Mining it will be necessary to carry out the operations of Extraterrestrial Refining with stations installed on the planetary objects or the great asteroids (or preferably asteroid belts).

In addition, the return of strategic minerals to Earth (for refining purposes) is a high-risk re-entry , the same issue exists for De-Orbiting (see for example mission XR-SDR, Space Debris Remediation) operations for the missions themselves and for the Earth’s environment in the event of an accident. Moreover such projects do not have currently a proper ROI financial returns for investors.

Remains the management of the distance component with respect to the earth, for the asteroids, very far from the earth which is the case to 98% of the population of the asteroids designated as industrial target.

Our Mission is fundamental for any later Colonization (Mission XR-COL) and for the developing Space Industry (Mission XR-SPACI).

IMPORTANT NOTICE
GROUND CHEMISTRY AND EXTRATERRESTRIAL CHEMISTRY (Related to Mission XR-PP)
All terrestrial Earth-Made chemistry concerning inorganic and semi-organic chemistry , is based on the use of „normal water” under terrestrial gravity according to standard conditions and pressure with external medium N2 / O2.

These exceptional conditions favorable to the chemistry of life and catalysis do not exist on the celestial objects which surround us and therefore the classical chemical reactions are not simply obtained or applied, a new CHEMISTRY must be born (XR-PP).

PLASMA CHEMISTRY (LOW and HIGH temperature) (patents 2006)-USPTO 2016/PCT 2018 Phase)
Plasma chemistry will allow the extraction of rare gases (He, Ar, Xe …) from lunar rocks or other planets, moons and asteroids, but also the most important and vital raw material of all WATER in different forms in rocks, sand or ice.

When the gravitational conditions are very far from the basic Earth conditions, necessary to bring natural isotopes and ions in contact with water, artificial centrifugal stations will be proposed allowing the creation of chemical salts essential for chemical engineering and biological and agronomic engineering.

Plasma chemistry makes it possible to create alloys and chemical reactions in the absence of water, as happened on certain planets including the earth at the very beginning of the geochemical activities.

Water should be considered as a molecule with very interesting thermodynamic properties.

Thermodynamic studies associated with MagnetoHydroDynamic MHD conditions allow, depending on the magnetic susceptibilities and Curie points, in order to select the best catalytic species(included Ln3+) in order to seed the plasma including to regulate the plasma LTE and PLTE zones.

These methods complement the reports described by NASA JPL (materials processing 1981-82-83 and the PERT report communicated to NASA-JPL in 1981-82 Christian Daniel Assoun as adviser for JPL-NASA (W.H.Steurer- J.R.Carruthers).

PLASMA CHEMISTRY on objects
When high-temperature or low-temperature plasma chemistry has provided raw materials of technical purity, these raw materials will be introduced on-site or transported to a HELIOTORR (REFINING) Station (patent granted) for refining in the various grades of purity required by manufacturers.

REFINING ON ASTEROIDS (patents 2006-2016-2020 USPTO/ 2018 PCT Phase)
The method of refining(on place) by plasma methods, isotopic separations and selections is the only one applicable on asteroids.

The deep space conditions in which asteroids are found are fully adapted to isotopic separations.

Moreover, we will save 98% of the electrical expenditure of the primary and secondary vacuum pumps and unmanageable diffusion in deep space.