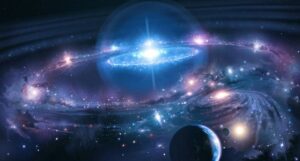 Quantum machines „in principle” include future quantum and assimilated computers, but the industrial future must be specified with regard to their applications to space projects.

A large current media coverage of the first results obtained and transposed into the public domain have given rise to many industrial expectations which are at the laboratory stage but whose results collaterally generate mandatory uncertainties, in particular related to the phenomena of DECOHERENCE.

As far as GlycanSpaceXR is concerned, our goal is not related to the domestic computer industry, but to the future quantum tools to be developed in space missions and colonization of the solar system and beyond.

These missions of processing, storage and backup of industrial, military data or scientific information in planetary orbital zones, at first certainly will be installed on the Moon.

The details of these missions do not fall under this first presentation of GlycanSpaceXR.

These moon safeguards could also contain physically genetic lines of known species in another compartment of the planetary MEMORY, the lunar temperature on its hidden side allowing for proper cryogenics (27 K to 40 K).

The Moon can be this sanctuary of information but also other moons of the solar system.

It is reasonable that this storage would be active and underground (vitrified) not allowing the cosmic radiations to deteriorate the installed quantum machines.

It is not known a lunar magnetic field to date, the core being solid, and the absence of dynamo effect can not create an intense magnetic field.

There may be a random magnetism derived from meteorite impacts on the lunar soil(kinetics shock) in presence of rocks with iron or lanthanides or magnetic-iron serial.

In any case these QM Quantum Machines version from GlycanSpaceXR are not sensitive to weak or intense magnetic fields and will be protected by layers of gold nanoparticles and Bismuth envelopes.

It is worth mentioning that the QM we develop are not based on quantum systems linked to electronic sources.

A lunar QM or Orbital interface would allow the registers to be updated without compromising their integrity.

These QMs could not be subjected to physical intrusions, as we know them on earth but the corresponding CyberSec is still to be developed. Thanks to quantum cryptography we nevertheless have an almost completely invulnerable CyberSec soon available.

Some simplified versions of QM could be installed in GEO Earth orbit and not in conventional orbits.

The safety of BIG DATA in GEO orbit and others by means of several satellites with conventional computer systems is very vulnerable and could not represent proper security means for any sensitive data.

The discovery of quantum entanglements was born at the same time as the quantum formalism and the experiments associated with it either to defend this discipline or to put it in difficulty.

Since 1973 to the present day, many teams have been able to adequately demonstrate the phenomenon of entanglement and even to use it on a satellite (quantum teleportation).

Origin of the decoherence of a quantum system
The quantum repository using bosons of which photons, considers that the system itself contains the tensors of decoherence which is added to the conventional external factors of decoherence (gravitons and in general cosmic radiations or possibly dark matter).

In a quantum creation by a specialized experimental means, the referential at the moment of creation carries with it the operators and tensors(annihilation operator coherent state) which will express themselves or not express themselves according to the nature of the means implemented, hence the decoherence will exist or will not exist.

A priori, all the success of the experimentation resides in the resolution of this main problem of decoherence.

Our Agency’s quantum approach to this question is completely different and must eliminate the phenomenon of decoherence before the creation of entangled bosons (patent writing).

We have privileged the bases of HFS

HyperFineStructure which we believe could lead to experiments that cannot contain DECOHERENCE since the structure of atoms is stable except for radioactive decays (but also to be verified).

Moreover the atoms can easily in the spectroscopy place be codified.

The good knowledge of the HFS makes it possible to construct quantum machines which will not be subjected to phenomena of diffraction or interferometry linked to the experiment.

The number of Qubits can be up to 64.

These Quantum Machines having as their raw material some „noble” gases and crystals can be easily moved to other celestial objects or orbital stations or spacecraft in the solar system and beyond.

It is not at all certain that Quantum (classical) or assimilated computers can withstand long treks in our solar system and beyond, in fact atomic or nuclear propulsion systems (obligatory for long treks) could neutralize them because radiations, the creation of intricate phenomena and paralyzing the means of calculating defense and exploration of spacecrafts.

This discussion goes beyond the scope of XR-QM.

Click here to be directed to a limited list to companies involved in quantum computing.
Some links of interest in Quantum Physics:

For us at GlycanSpaceXR, our goal is not linked to domestic computers, but to the Quantum tools that have to be developed in the context of spatial and colonization mission.