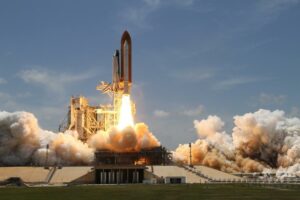 The first programs will implement several smaller-scale prototype launches for the Space Debris Remediation and Extraterrestrial Mining and Refining missions.

These launches will be considered Proof of Concepts or Small Scale POC 1 / 7em.

A POC (TERMINATORR) mission will be initially positioned in the GEO stationary orbit 35’700 km and will be equipped with H2O propellants and fuel reserves in order to reach in the future dangerous zones where inactive satellites are placed, as well as regions GRAVEYARD for unused satellites, which we consider as dangerous too for manned missions.

These POCs will be considered initially as POC OBSERVERS for mapping the zones at risk in real time.

A first particular POC will be performed in sub-orbital flight micro-gravity with NASA Shuttle.

The motorized POC will allow to direct and correct the drifts as well as the deviations of Heliostats Cx and Cμ values (HELIOTORR).

A final POC equipped with plasma and H20 engines will be sent and will be coupled to the 400 km ISS station. 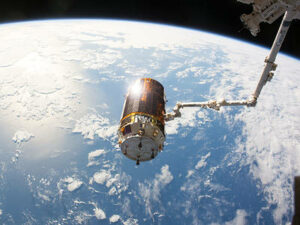 When the POC missions are completed, a Space Debris Remediation (SDR) mission TERMINATORR will be sent to GEO 35’700 km altitude and start mapping in real time hazardous areas including Graveyard for satellites out-of-service.

SNC with Dream Chaser capabilities can do the job in order to launch and assemble the POC or prototypes of TERMINATORR to ISS: