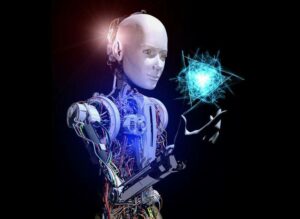 Definition of „INTELLIGENT ROBOTICS” according to GlycanSpaceXR

„Intelligent Robotics” means any installed hardware or software organization (binary and / or Qubit type) in a static and / or dynamic human-built structure able to fulfill intelligent tasks .

By static one means (a control and control center), strategic center, a warehouses, data center a plant installed (versatile) on the Moon or in orbit around a celestial object, a data security center on celestial object on the surface, under dome or underground.

By dynamics we mean a spacecraft, a submarine, an asteroid assisted by plasma motors, a helium-filled or hydrogen-filled aerostat (oxygen-free outer atmosphere) – used for the exploration of planets and moons.

By dynamics we mean also a robot able to assist man in these displacements and missions, its morphology being suitably adapted to mission tasks.

All technological bases exist on earth but with regard to GlycanSpaceXR Agency XR-COL mission, it will be necessary to develop and adapt them for the creation of:

Mission Analyzer Robots assigned to:
All GlycanSpaceXR missions or those of external missions entrusted this Agency.

Decision makers (analysis and provisional execution of an order):

It is necessary to develop the proper “Decision Maker” robots and softwares that will led the proper realization of the missions. The global integrity of the main missions and of a collateral missions crucially depend on this.

As a matter of security priority: The decision makers Robots will not qualified to participate (except in exceptional cases) in XR-MED or XR-SSD defense operations. Exception cases are decided by specialized and accredited settlers in these areas.

There will be multi-entry software that allow to send secure orders that will be analyzed and then accepted, rejected or requested for details and confirmation, depending on the related level risks and level accreditation concerned.

The refusals are motivated and call for competency levels that only the settlers themselves have programmed and secured in advance. This possibility of refusal comes first and at the end only properly accredited human officers will decide after analysis.

In the phases of refusal or stand-by orders, several settlers may intervene to confirm or decline orders in orbital conditions, moons or planets, so as not to compromise the missions, in case of conflict with the decision division, a division of the Board of Appeal records the procedural incident and the decision will be judged by a colonist or settlers with a higher degree of accreditation.

It is necessary to have both completely independent functioning for each robot and a properly secured information transfer gateways that will be secured at the responsibility of agents, helped if needed by analytic tools. (MEDIATORS)

There cannot exist in a colony on celestial object or in orbit, orders or decisions that may disrupt an entire decision while such a decision will whatever have to guaranty the safety of the colony.

Robots in general will be equipped with Quantum Machines (XR-QM Mission) mission, 16 qubits would basically do some tasks, classical computers could also be used, coming years quantum computers will be necessary for the global safety of the Colony.

Various countermeasures to neutralize possible attacks will be necessary, as well for the programming and software side as for the hardware side.

It is obvious that the banking world as we know it on Earth will have to be both adapted and profoundly modified for Space.

Since these activities will be new and carried out in a new framework (planets, moons), economic rules will be different, economic resources being produced differently in a virgin setting and whose history will begin when the men, machines and robots produce an industrial factory.

A major awareness is needed for all international land actors to set new economic rules in the solar system (consult XR-LAW mission).

The banking world will have to be adapted and changed accordingly and a new CURRENCY will have to be installed which will not have compulsory parity with terrestrial currencies, since the activities in the solar system are new and carried out by new actors. We will both have to economically safe Earth on the one hand and economically safe the outer space in a coherent way.

A new generation of Industry and Economy for the Solar will be born!

These are themes and reflections that will have to be taken into account in the next SPACE Laws.

These political or ethics themes are not part of our study.

Human proximity robots are specially programmed to help and to control the vital constants (among other missions) of settlers and astronauts and CREWS (long treks) but also the colonists directing industrial programs or medical. This robots will “guardian angel” security vigilance levels.

The first priority of this robots, if not permanent safety, is enhanced prevention.

For example, the Human Proximity Robot will be equipped with a quantum-type controller currently being developed by two American universities, which will be able to check if the BBB (Blood Brain Barrier) has been compromised and if chemicals have disrupted certain brain lobes frontal lobe, seat of decision and command, this will be a real-time pharmacodynamic analysis safety.

Apart from the first priority of those robots that is Human Safety the second priority will be Human Comfort and Well Being.

Laboratories of “Simulants” for Extraterrestrial Mining and Refining.
Luxembourg and California Pasadena

We consider that the best way to understand the geochemistry of terrestrial planets is to create Simulants laboratories using plasma technologies since plasma exist in celestial objects.

The dynamics of molten rocks (magma in motion) in the Terrestrial, Micro-gravity conditions or in Deep Space should inform us about the para-magnetic properties of certain elements (Fe-Mn-Co-Ni, others -) and the display of an abnormal magnetism above of Curie points.

The presence of Silicon should inform us if there is a circulating electrical charge within the magma.

PLASMA SEEDED with separated components CO2-CO-Al-Mg-Si-Fe others (Enthalpy of formation) at ionized conditions.

MAGMA RELAXED
It will be interesting to study the formation of electric and / or magnetic fields following the high velocity ejection of magma, previously seeded in a plasma, NPLTE areas should have magnetic and electrical properties.

MAGMA Influenced by an MHD system
Due to the external and internal temperature (core)of 5500 K (PLTE) telluric objects, only the interpretation of associated plasma states allows us to understand the kinetics of magma.

As a result of the phenomena related to the accretion disk, all the materials were in the form of plasma at the time of the creation of the proto solar cloud, it is possible that several phenomena have been in competition, namely plasma relaxation (entropy) and the gravitational forces which were strong enough to retain and compress hydrogen and its isotopes and Helium. They are actually found by spectrometry of the heavier elements Silicon and Magnesium and rare gases, but it is possible that heavier elements were the object fission and are currently represented by rare gases.

OTHERS OBJECTS IN THE SOLAR SYSTEM IN THE ACCRETION DISC

An accretion disk has been formed and many objects have been created including earth (telluric planets) and moons.

For giants gaseous planets the theory of their solar origins (materials expelled from the sun), is not demonstrated, these planets do not possess a solid core of metal of the transition metal series Fe-Co-Ni-Mn others.

Nucleogenesis leads to heavy isotopic elements, these isotopes of the giant gases of the elements of the series of transition elements are not found in the nucleus.

It could appear that the gravitational instability conditions were responsible for the formation of these giant gases, the masses of proto-materials He, H (gases-liquid-solid) was not strong enough to produce a fusion and lead to nucleogenesis and a solid core.

All the hypotheses are to be debated, and might be the presence of several disks of accretion in the same big one disk, could explain the gravitational instabilities.

Nuclear gases could have remained in a gigantic space and thus the nucleation by fission and / or fusion could begin and give rise to heavier elements such as Boron, Carbon, Silicon and then transition elements.

At the beginning of solar system formation, the Sun should be considered as giant nuclear source, the matter was concentrated in the hole of its cosmic genesis.

The Martian and the Moon REGOLITHS are comparable in composition but not in radioactivity.

The following NASA study of 142 pages is an enormous work indispensable to future man or unmanned colonization missions on different planets and moons, we deliver some significant and important extracts hereafter.

The Moon soil regoliths are considerably less radioactive than the Martian soil.

In 500 days, the Martian soil receives the equivalent of the lethal dose that affected the first “technicians cleaners” on TCHERNOBYL.

Men and Robots must be seriously protected

The consequences are simple regarding the colonization of Mars (XR-COL Mission).

An Agronomy on Martian soil, even under dome, represents a permanent danger for the crops and the man who will consume them.

Conventional nitrogen fertilizers or other nutrients will be affected by ionizing radiation and toxic free radicals will be generated in soils , leading to significant toxicity.

Simulants laboratories on Earth will be indispensable to know the ideal mixtures of minerals in order to participate in the mining and refining operations on Moon-Mars others.

This expertise will be used to explore deep layers beyond 1000 meters on Moon or Mars.

Robotics will be indispensable, as there will be PERT plasma tools on the Moon and March, the delicate maneuvers of which will have to be entrusted to intelligent robots.

On Earth laboratories experienced in drilling, excavation, construction, using PERT plasma tools will represent the setting up of an indispensable expertise to qualify resources and Industrial Robots.

The robots will have to know the basic XRF and spectrometry spectral data and will have to make the decision to continue a drilling or excavation or vitrification of regoliths.

The aging of polymers is exactly known in the face of UV or radiation, as well as metal alloys or oxides containing impurities including oxygen or fluorides.

The vital zones of the robots must be insensitive to EM fields because they are equipped with computer software.